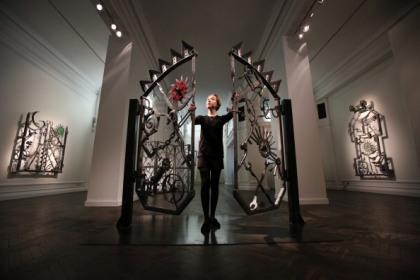 As an Artist/Blacksmith walking into Bob Dylan’s ‘Mood Swings’ exhibition, I kind of expected to go ‘Hmmm, anyone could do that’, and I did in a way, but not for long.  You HAVE to look at this exhibition through artistic eyes and read about the inspiration and background stories, and not just from a Blacksmith/metalworker’s critical point of view.

The exhibition consists of a series of metal gates welded out of scrap metal or as they put it ‘vintage iron’. There are also a series of vividly coloured oil paintings upstairs and in the basement there are some 1920’s American car doors, some smashed up and others with bullet holes in, entitled Gangster Doors. Each piece has a poster of a notorious gangster, like Al Capone next to it. I loved these, being a massive fan of the 20’s and films like Bugsy Malone.

Apparently these gates and other pieces are the outcome of the Bob Dylans’s lifelong fascination with welding and metalwork.

‘I’ve been around iron all my life ever since I was a kid.  I was born and raised in iron ore country – where you could breathe it and smell it every day, and I’ve always worked with it in one form or another.  Gates appeal to me because of the negative space they allow.  They can be closed but at the same time they allow the seasons and breezes to enter and flow. They can shut you out or shut you in, and in some ways there is no difference.’ – Bob Dylan

So Bob (I feel like we are on first name terms now I know we share the same interests in metal work and having had a ‘rare glimpse into another part of Bob’s own personal universe’) has a very good eye for junk metal and putting these pieces together.  They really do work, some better than others and he really can weld!  The work is not beautiful but it’s not supposed to be, it does have this wonderful sense of balance and movement.  Some of the gates look like they are about to start working, the cogs will slowly gather up speed or the meat grinder handle will begin turning.  There are some really nice flowing forms and he has switched between non symmetrical to very symmetrical gates, cutting and welding pieces together cleverly, trying to imitate mirroring images with balance and form.

There are also musical references in some of the works which is a wonderful reminder that this is Bob Dylan’s metal work.  It really is his inspirations that come through. Every now and then there is a little hint of paint left on a piece of scrap and this subtly lifts the work. Each piece is well thought out and beautifully put together.

Also on every piece of work he has a distinctive and striking makers mark.  It is a small metal buffalo, with the name Black Buffalo Iron Works stamped in, followed by his signature. What a fantastic idea, I might be inspired to do the same with our ‘Pink Avil’ logo (Nice one Bob).

The price tags attached to these pieces on the gallery wall in New Bond Street, would make most blacksmith’s eyes run rivers.  We are talking hundreds of thousands of pounds.  But, let’s not forget, this IS Bob Dylan, an artist with a most incredible history and story.  These pieces come with such provenance there is no doubt they will sell for what has been asked.

For the blacksmith’s, it is not just welding and assembling, Bob has clearly heated some of the metal parts up to bend into shape, but on face value, it does look like anyone could do that. No, he hasn’t forged out the tools he has used, or punched out the holes, or fire welded the metal, but so what? That’s not what he was aiming to achieve:

“Its partly about looking back but it’s also about resurrecting these items and the physical act of putting these objects together”. We’re in Bob Dylan’s world now, tasting the metal from his industrial memories of the iron ore mines, and may be playing on an old crackly dusty radio is Dylan’s own ‘Working Man’s Blues’.  He really does have iron in his viens.